Throughout Jesus’ teachings, belief and faith are closely connected.  If someone believes, they will at some point develop faith.  If they demonstrate faith then the foundation of belief is revealed.  Belief and faith are never truly separate.

In the ancient world man’s own works, various spells, and incantations, became the attempt to control the gods.  Today some of these practices are referred to as sympathetic magic.  Man’s expression of the working mind, the purely intellectual mind, may not always be spirit directed.  For all of man’s earthly knowledge, man may still remain unenlightened—he remains asleep.  To turn the world from man’s dictate, the world turns toward faith.  Faith then becomes the most basic and available conduit unto God.

In Matthew 6:25-34, Jesus explains that a person should start with faith and certain confidence as a foundation before starting his day, expressed in v. 32-34:
“For the pagans run after these things, and your heavenly Father knows that you need them.  But seek first His kingdom and His righteousness, and all these will be given to you as well.  Therefore do not worry about tomorrow, for tomorrow will worry about itself.  Each day has enough trouble of its own” (niv).

In the above scripture, Jesus gives us basic steps concerning walking in the Way.  God observes the pagans and knows how they pursue their lives.  Jesus separates the pagan life from a righteous life. “Seek ye first the kingdom and His righteousness,” Jesus asserts the supremacy of God.  Jesus establishes an order, which is God first, followed by, “do not worry about tomorrow.”  Even though in this scripture Jesus does not directly mention faith, the underlying message propels the person toward faith and trust and builds an active faith foundation.

As we continue under the heading of Naming; a person can pray for more faith; they may also speak (name) faith into themselves.  The praying part most people understand, but the naming part is sometimes elusive.  The difference between the two is that prayer supplicates by the word of God, and speaking pronounces by the word of God.  Jesus prays in faith, but also pronounces faith, if even as small as a mustard seed.

For some, speech, or naming, rises and falls with every emotional reaction.  Mixed naming is often directed at themselves—first, they are positive about themselves; soon, they pronounce doubt or division.  All of us have experienced this teetering effect.  By bouncing back and forth, however, the faith walk is diminished.  They neither name themselves into faith nor faith into themselves.  Not completing this process, the fulness of the active faith message is reduced.

Sow the seed of wholeness and speak faith. 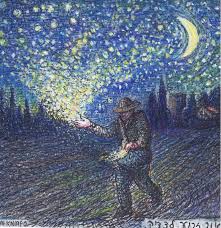 With the example of faith as small as the mustard seed man may remove mountains into the sea (Matt. 17:20), meaning to essentially accomplish great feats.  This scripture is intended to explain how a person removes spiritual obstruction (mountains) from his pathway.  These obstructions may be worry, guilt, or any number of other attributes, and this obstruction may include people who are unrighteously coming against you or those who hold you back.  Jesus teaches that if you have faith and do not doubt, that faith will remove the obstruction. “…whatever you ask in prayer, believing, you will receive” (Mt. 21.21-22).

Everyone is so concerned about renaming their circumstances, such as a lack of money or lack of a spouse, that they forget to start with themselves—inspect yourself before you start renaming everything else!  When you Walk in the Way your soul-nourishment is your first priority.  Get within yourself and get with God, speak from the kingdom within, it is only then that the pathway is clarified.  Since most people are familiar with their speech causing them trouble, there is nothing wrong or embarrassing about using your speech to bring about rectification.

When Eve named Cain after ‘gain’ (Who Is Cain?), she talked about what she had gotten, instead of what God had given her.  Eve mentioned herself first, instead of mentioning God first, thus naming in reverse order.  Frankly, this is what most people do.  Remember, the naming you give and the Word you speak becomes the journey you travel.  There is an old saying, and it goes like this, “Let me observe how a man speaks today, and I will tell you what his life will be like five years from now.”

Jesus tells the Roman Centurian that he has never seen such faith as his, and he tells more than one person that their faith has made them whole.  The illumination provided by faith now gives rise within the soul—the city on the hill shines forth as love, compassion, charity, knowledge, and wisdom.  But without faith as a first step, none of the above may be discovered, nor maintained.  Likewise, without faith, that which you speak in the Word or pray will remain lifeless, ineffective.

Jesus addresses the subject of judging in Matt. 7.1: “Pass no judgment, and you will not be judged.  For as you judge others, so you will yourselves be judged, and whatever measures you deal out to others will be dealt back to you.  Why do you look at the speck of sawdust in your brother’s eye, with never a thought for the great plank in your own.”

What is the spiritual problem with judging?  Why do all societies have warnings against judging others?  Jesus prescribes judging ourselves, and infers we should do so first.  The thought of the individual to “pass no judgment,” in effect leaves judgment to God.  The overlay of our own judgments just get in the way.

Judging is essentially naming another.  You name them after your judgment.  Judging attaches you’re naming to that individual.  The judging you exhibit must reside in you first before you speak it, and thus, even at the moment, you initiate judgment upon yourself.  The approach Jesus recommends proceeds from the spirit within, and not how you size up a person and then make a series of judgments.

Judging with discernment is what God wishes to develop in each person.  In Ezekiel 7.3, Ezekiel speaks to judgment on Israel, “I will judge you according to your ways,” and in v. 27, “I will do to them according to their way, and according to what they deserve I will judge them.”  This kind of judgment is given within context, and therefore is not meant to be critical, but fair.  “Whatever measure you deal out to others will be dealt back to you” held true in the Hebrew Bible as well as in the new testimony Jesus gives us.

You will be judged after your own fashion of judgment, whether out of vitriol or out of love, or whether by your own personal standards.  This form of judgment will then be returned to you.  Thus the prohibition when Jesus says, “By with what judgment you judge, you shall be judged; and with the same measure (nature) you use, it will be measured back to you,” Matt. 7.2

Matt. 7.2 tells us much about the nature of judging, for you may not know what the spirit is trying to work out in that person’s life, and so by improperly judging you usurp another soul’s integrity.  Constantly judging others leads a person into a distraction from their own soul progression, always pointing out the faults of others, but only rarely seeing one’s own. Judging may also lead to gossip and slander as one voices these opinions as if they are fact, and then others take them up as truth.

To judge righteously (after the nature of the spirit) and to walk in faith are both important components of the Way.  To understand that the power of naming comes by the spirit of God, Jesus has brought to us an astounding revelation.  The enlightened power to name, which can give birth to faith— this great power lends unity and wholeness with God.

Sow seed that personal judgments be laid aside for godly revelation.