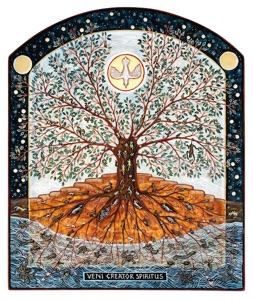 Small sea creatures and land animals are below.

Discernment and authority are powerful tools in the use of the spoken word.  Used properly these attributes can change a person’s life and change their soul-nature.  Discernment relative to what really needs to be spoken can lead to a graceful but precise refinement in spiritual progression.

The Bible is replete with important examples concerning naming: what is named, who is named, what the names mean, and who is doing the naming.  ‘John the Baptizer’ was later referred to as ‘the Baptist’, ‘the Preparer’, and ‘the Forerunner’.  The power to name explains why the word YHWH was not spoken by the Jews, and so that one should not use the Lord’s name after one’s vanities, or personal desires, even if by mistake.  Later, even as Jesus pronounced healing, it becomes clear that the spoken word and the power to name has a certain preeminence within scripture.

In Gen. 1.26-30, Adam is given authority over that which God had already created.  In Gen. 2.16-17, God tells Adam about the Tree of Life and the Tree of the Knowledge of Good and Bad, and of that which he may and may not eat, concerning which, discernment or wisdom is required.  In Gen. 2.19-20, Adam begins to name the beasts of the field.  Scripture thus associates the authority to name and the attribute of discernment as to the proper way to proceed with naming. 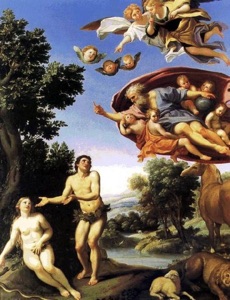 Adam blames “the woman you gave me”
for having eaten the fruit from the Tree of the
Knowledge of Good and Evil. Interestingly,
Eve is later given her actual name (Gn. 3.20).

In the above ‘order of events’ discernment (wisdom) as to good and bad now take on new importance.  We discern and we name.  Authority for what we have named is assumed.  It becomes ours.  We are responsible for what we have named.  The responsibility for our naming appears in the form of cause and effect, or how life returns to us in circumstance, or what I sometimes refer to as the ‘order of events’.  The allowance God gives opens the door to spiritual power for you, and in a certain real way deals with the scripture in Gen. 1.26, “Our image, after Our likeness.”  Without the power to name neither God nor we would have spiritual power, as nothing could be clearly defined.  For us, the world would remain as a phenomenon, but without order or meaning, much as we observe and perceive the consciousness of animals to be.

Through Adam’s inheritance this power to name is delivered unto all of mankind.  Adam has the spirit and light of God imbued within him, or ‘blown into him’.  His spoken word is animated by the spirit within, that which gives life to the soul-mind, and thus through the spirit gives meaning and power to his naming.

Since Adam was fully awakened, the power of his naming was full and complete.  Just as with Adam and Eve in the garden, just as with Jesus, the more awakened a soul is the more powerful his or her naming becomes!  The previous sentence is very important and partially explains why the fall from a higher condition can be swift and devastating, just as Adam and Eve discovered.

God delivers His first great gift as he bequeathed to Adam the power to name.  Many gifts are mentioned in the Hebrew Bible and the New Testament, but the giftedness of the Power of the Spoken Word cannot be emphasized enough for those who Walk in the Way.  It is the one gift all people possess!

THE WORD: ORDER TO EVENTS

Be clear and consistent when you speak the Word.

The spoken word should be used to rectify a person’s pathway or soul nature, and is a most important power indeed, for it can completely change the speaker’s whole life.  For some, this might require keeping a notation, a journal to provide an overview of direction and purpose.  Remember, speaking the Word resides as an act of creation, much as when first spoken (thought-expression) by God, “Let there be light.”

With attentiveness (discernment) a person’s whole life may be recreated by the spoken word.  Without the pathway created by the spoken word, no pathway unfolds before us.  Our actions meander as our moods may strike us.  Thus we must ask, what actions are really taken?  Are they but haphazard?  What is the spiritual order of your life?  Easy it becomes for a pathway to fall into mixed and stumbling steps, and without clarity, something most of us have experienced.  Likewise, if the door to be opened is not named, the door you seek to enter remains hidden, and your direction and purpose become blunted.  Walking in the Way requires teaching and pathway.  Speaking and pathway run similarly.

Because the spirit of God gave us this power, naming produces a basic order or pattern which the spirit must honor.  Thus, clarity in our spoken word creates a broader pathway for the spirit to enhance us, whether we always perceive this activity or not.  Naming allows the spirit to proceed with a certain purpose and direction.  This purpose or direction may expand to fit circumstances as well, whether dealing with our personal or spiritual life, or the circumstances of our life.

In John 4.19-29, this example of expansion is well-drawn, concerning the woman at the well.  It begins with, “Sir, I perceive thou art a prophet.”  It ends with her going into the village and proclaiming, “Is not this the Christ?”  This section of scripture is worth studying closely.  How this scripture carefully unfolds provides an insightful view of the progression of expansive events.  Even though Jesus and the woman only converse, the power of these scriptures cannot be minimized.

Just as Adam and Eve both accepted the mixed fruit of the Tree of Forbidden Knowledge, and then named the fruit ‘good’, mixed consciousness entered their mind.  “Adam and Eve fell from the bright illuminated state of consciousness to the darkness of self-consciousness.”*  They were in effect then split apart, and not whole or at one with God.  Their light left them, which is the more correct interpretation to the biblical reference, “they knew that they were naked” (Gn. 3.7).  ‘Light’ and  ‘power’ are somewhat synonymous.  Adam and Eve became ‘naked’ and lost both.

Over a period of years, our speaking may show itself in a moment of circumstance that will ‘make us or break us’.  Our nature may be impatient, even rash, or arrogant and condescending, with words that are sure to follow.  The lesson is straightforward, our circumstances not only proceed out of what we do but also how we speak and name before we act.  Thus, our naming orders circumstance.  Unfolding circumstances reflect what soul nature is being activated.

In the garden narrative, God sets the creation of the garden.  However, and just as with Adam, the naming of our personal garden becomes an individual exercise of spirit manifest, of which the responsibility rests with the individual.  For each man and woman, how we name ourselves and our world becomes a constructive power for soul growth, and a power intended for our use.

View the gift and power to name as one faculty of enlightenment.  It allows us to take authority over our circumstances and even more importantly over ourselves.  For the effectiveness of the enlightened mind of man, this one great gift must be exercised.