The Law of Unconscious Growth—Good Soil

“And the man said, “So is the kingdom of God, as if a man cast seed into the ground; And should sleep, and rise night and day, and the seed should spring and grow up, he knows not how,” Mark 4.26-27.  In Matt. 13.1-52 Jesus explains the nature of the kingdom, also Mk. 4.1-32.  Jesus usually taught the common people with common examples. 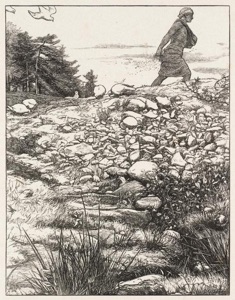 The image of a Sower walking through a field has always been an iconic portrayal.  Sowing is performed until the whole field is seeded.  The farmer then proceeds to sow different seed in a new field, nor does he mix his field with more than one seed.  Consistent and proper sowing is integral to the spiritual teaching of the Way, just as Jesus instructs in the Parable of the Sower.

In Mark 4.26, Jesus begins with the kingdom, “So is the kingdom of God,” and then how the kingdom works, “a man cast seed into the ground,” he then waits (patience), “…and the seed should spring and grow up.”  This is a simple process: you sow seed into the spirit, and the spirit will bring it forth.

Jesus teaches us a critical aspect of pathway— name the seed, sow that good seed, and the spirit of God will begin to manifest within and without.  “For the earth yields crops by itself: first the blade, then the head, after that the full grain of the head” (28).  Some sow love on their pathway.  They repeatedly sow the seeds of love until it becomes a part of their soul nature.  Others sow faith.  Some sow for greater knowledge.  Sow until you have sown the field, then step back and the field will sprout.  Nor do you have to watch it every moment.  It is only a matter of time, “night and day,” Jesus says, and the field will begin to show crop.  “When he put in the sickle” the harvest is reaped.  The harvest is the portion of the kingdom that comes into your life.

When discussing the Way it is so important to study and reflect on the nature of the kingdom.  Jesus often tells us what the heavenly condition is like, but so often this message is overlooked.  Let us take an obvious and much-used example– the person who needs more money.  Many go directly to the prayer or speaking for the money itself, never realizing that they have not first prepared themselves from within– they have yet to become good soil.  In effect, they have not plowed the ‘Field of Myself’.  In fact, throughout their whole endeavor, they may be the rocky ground itself (v. 16).  No matter how often they name the virtue they would have, they cannot have it, else it is very long delayed.  This is one reason why people may pray and pray but get no results.

Are you a person who is good at giving, but not so good at receiving?  Have you sown to be a receiver of God’s blessing?  Are you willing to be guided to where your money can be found?  Are you willing to do what must be done?  Desire and need, God is willing to provide for. Mark 11.24 gives us a recipe for our hearts desires: “…whatever things you ask (desire) when you pray, believe that you receive them, and you will have them.”  The broader notion is given in Psalm 51.6: “Behold, You (God) desire truth in the inward parts, And in the hidden part You will make me to know wisdom.”

The inward or hidden parts are really where unconscious growth begins.  Relative to naming, sowing, praying or speaking the Word, it is wise to begin with yourself.  Reflection is often required.  With reflection, a more mature prayer or sowing life will begin to develop.  Do not be afraid to question yourself!  It is also true that a need may be great, or a person may be convicted on some matter, thus the first speaking or prayer may be exuberant.  Later a more careful and considered speaking begins to take its place. Consistency and a more matured approach is also a sign of unconscious growth.

Spiritual development is never in a hurry–first the plow, then the seed, then the growth, then the harvest.  There are many reasons for this natural process in thought, among them is the lesson of incremental learning, or how a person absorbs each step.  Have you prepared yourself (plowed) to receive the seed you sow?  Do you have an inward message (inward part) which is speaking the opposite of what you sow or seek?  Are you mixing two different seeds in the same field without realizing it?  Are you patient for the growth, or is your nature hasty?  The answers to these questions begin to get sorted out within the prayer or sowing life as each person moves forward.  Your inner nature, as well as your sowing practice, will improve.

Recall how the ‘order to events’ is mentioned in many lessons throughout this work.  Here we have one of the most primary uses for understanding the discipline of proper order.  In terms of our example, the speaking might look thus: “I speak poverty out of myself and my life, and I speak money (wealth) into my life.  I am willing to do what God shows me to do, and in the will of His spirit.”  There is no mixing of seed, and ingrained messages of poverty are at least approached.  There are as many variations on how to sow seed as there are people, but basic principles will always apply. Teaching and pathway unite within the principle of unconscious growth.

You are the soil where the crop will grow, prepare yourself properly.  If you are seeking a spouse, then you need to make sure your clothes are pressed.  Some have suggested that before any sowing is done a person cleans their whole house first. The effect of cleaning is likened to plowing the ground so as to properly receive seed.  Complete your sowing, be patient even as you look for a sign, then as it appears put the sickle to the crop.

Sowing into your pathway is simple to understand, but how few practice it, and fewer still who understand that the reaping is of the kingdom, and most directly applies to you as a soul, and not just getting things.  You bring the kingdom into yourself by sowing good seed, the spirit brings forth the crop from within (unconscious growth).  You now become an active participant in the kingdom with God!

Just as in the mystery of growth on earth, so Jesus reveals the mysteries of growth within the kingdom.  “The sower sows the word,” Jesus tells us in Mark 4.14.  Jesus speaks of spreading the word of the kingdom of God.  Soon after in Mark 4.20: “But these are the ones sown on good ground, those who hear the word, accept it, and bear fruit: some thirtyfold, some sixty, and some a hundred.”   The good ground is intended to describe yourself.  The good seed, the good word, and your ability to accept the seed remains your opportunity to participate in the kingdom.

Once the seed is sown the growth begins, whether or not you are conscious of it.  It grows night and day.  Since the kingdom of God is within you, this means the good seed you sow will always manifest within before it manifests without.  You are the first signpost for what is coming.  Essentially, sowing the good seed is like an instruction manual.  You have to follow the directions.  The study of the parables concerning the Sower, as well as the accompanying scriptures describing the kingdom, are deeper than at first glance and require some effort in gaining every nuance.

Heaven, the kingdom, is essentially brought down to earth by you naming the good word on that which you wish to achieve, consistently sowing and looking to the fields as if already white with harvest (Jn. 4.35), and then receiving or reaping the harvest as it fully abounds.  You are essentially naming your pathway after that which is righteous, a ‘kingdom pathway’ if you will.  You give up that which is holding you back, and you pronounce to the good.  God will honor your sowing.  All becomes a part of the heavenly blessing, as you literally operate in and with kingdom power.

The signs begin slowly.  First the blade, or the indication that growth has begun; next, the early sign that a mature crop is in the process of growth, the formation of the ear; finally the fruit begins to show, and once mature the harvest is taken in.  A further awakening occurs as the harvest is accepted.  Steady and consistent, this method of working truly offers the keys to the kingdom.

There are some who think they are not worthy.  When the scribes and Pharisees brought to Jesus the woman caught in adultery, he demonstrated mercy and saved the woman from being stoned (Jn. 8.3).  He pronounced her worthy in the eyes of God.  Jesus held her up to God, showing mercy, protecting her and naming good seed into her.  What seed did Jesus leave her with? “Go,” he said, “and sin no more.”  The seed was planted that she should not sin again.  If the woman who sinned is of worth, you are of worth.  Likewise do not diminish yourself, even in the midst of sin or great difficulties, follow the instruction to plant good seed.

As you plant the good seed you will find there is a greater contrast to good thinking and bad thinking, constructive actions, and destructive actions.  Once the planting has sprouted and grown strong, it is then you will begin to see the weeds.  In the Parable of the Weeds, also known as the ‘Wheat and the Tares’, Matt. 13.24-30, Jesus explains that a man sowed good seed into his field, yet others came during the night to sow weeds.  The owner of the field tells his servant to let both grow until the difference becomes apparent, then the roots of the wheat will be strong enough that pulling up the weeds can be accomplished.

Jesus makes clear that the spirit of God becomes more pronounced within daily life, which represents the growth of the wheat.  Negative thinking, doubt, and despair will show themselves due to what you have already sown, the growth of weeds.  Yet this contrast allows a person to be watchful toward falling back into bad mental habits, even if one by one the weeds can be pulled from the mind.

As Jesus teaches, stick with the vision of the field ripening toward harvest, and stay on a positive course.  The spirit nourishes your planted seed just as it does the planted seed of the farmer, and allows the crop to grow within you.  In both cases, the growth is spontaneous, both in the physical world and in the spiritual world, even though we may not be completely aware of how the spirit accomplishes this growth. The Parable of Unconscious Growth found in Mark 4:26 illustrates this understanding very well.