Why did John’s prophetic ministry cause such a stir among the people?  Why at this time did the people consider preparedness for Messiah so critical?  Why is John so important to the teaching of the Way?  The answers to these questions will allow us to delve much deeper into John’s ministry.

John the Baptist was raised a Nazarite, committed to this tradition before birth.  At John’s birth his father, Zacharias, prophesied: 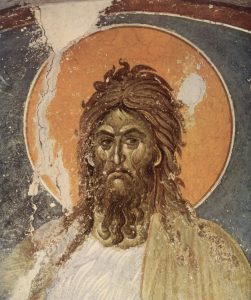 “Blessed is the Lord God of Israel,
For he has visited and redeemed his people,
And raised up a horn of salvation for us
In the house of his servant David,
As he spoke by the mouth of His holy prophets,
Who have been since the world began,
That we should be saved from our enemies
And from the hand of those who hate us,
To perform the mercy promised to our fathers
And to remember His holy covenant,
The oath which He swore to our father Abraham” (Lk. 1.61-73). 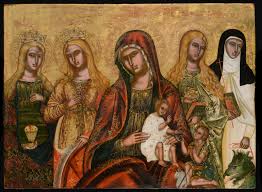 John, with his mother and four women.  The four attendant women signify a birth of great importance.

Mary, the mother of Jesus, was almost certainly among them.  Elizabeth was from a priestly family, which tells us that Mary is within the same high priestly family.

The Nazarite is specially consecrated to God.  It is only on two other occasions that consecration had been announced either before or at birth, and both are biblical luminaries, Samson and Samuel.  Anna the prophetess may have been a Nazarite (Lk. 2. 36-38).  Many believe Paul took Nazarite vows, in part due to his abstention from sex.  The nature of Nazarite life lends itself toward the following: serving others, the study of scripture and knowing the Law, taking solitude, leading a contemplative life and seeking God, receiving wisdom and enlightenment into His spirit, impart the word God has witnessed.  John seems to encompass all of the above-mentioned attributes, with his final act as imparting the Word and declaring the soon-to-arrive Messiah.

‘Men of Perfect Holiness’ would apply to John the Baptist, and is the descriptive name for Nazarites as mentioned in the Dead Sea Scrolls.  John’s commitment to the Essene message also seems apparent, and many scholars, if not most, consider John to be a Qumran (Osseaen) Essene priest.  The prophecy from verse Luke 1.77: “To give knowledge of salvation to His people by the remission of their sins… (79) To give light to those who sit in darkness and the shadow of death, to guide our feet into the way of peace,” describes a powerful priestly anointing.  To become ‘set aside’ and thus to come into some measure of holiness, to remit from sinful thinking and not just sinful actions, the contrast of light and the shadow of death (spiritual death), and to guide each person into peace in the Lord reflect the highest of Essene tenants. 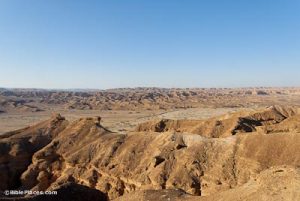 ‘Remission of sins’, ‘light’, and “darkness and the shadow of death” are very reminiscent of writings appearing in the Dead Sea Scrolls.  These themes also reflect within Jesus’ ministry.

John stands in the middle, pointing to both the past and the future.  He does not replicate the message of his Qumran Essene brothers, who were legalists, but seems to spring from a message not yet imparted to the people.  John’s water baptism only requires confession.  The trickling water across the forehead represents a clean start and a commitment to obtain a new framework for thinking, not so much the message of further obedience to the law.  John’s water baptismal holds the place of the anointing with the Holy Spirit, which the Messiah will later bring.  Messiah is near and all of us must become prepared.

John and Jesus both referred primarily to sin which concerned the inner man, even unto a person’s thoughts.  Unfolding from within becomes the mystic calling, the need for spiritual rebirth.  These two qualities most closely deal with John and Jesus’s ministries and clearly reflect the teaching of the Way.

John speaks of the impending axe put to the root of trees which do not bear fruit. He refers to the “brood of vipers,” the Sadducees and Pharisees.  John speaks of ‘preparing the way of the Lord’, and not relying for salvation on the fact that you are a ‘child of Abraham’; ‘Child of Abraham’ becomes the message of the past.  Being a Jew in and of itself is no longer enough.  He breaks down group consciousness and group identity.  He breaks down the very system of legality created by the lawyers.  Each man and woman must now choose individually.

If the Jews, who had divided into as many as twenty different denominations, then the further separation by John and Jesus will draw the line as either for or against—Jew ye remain, else ye repent of your religiosity and step completely out.  In Luke 1.17, John is presented to us as “…go out ahead of Adonai in the spirit and power of Elijah, to turn the hearts of fathers to their children and the disobedient to the wisdom of the righteous, to make ready for Adonai a people prepared.”* John must be accounted a prophet, he moves forward within his dedicated path “in the spirit and power of Elijah,” which provides the specific indication of John’s priestly roots and high status. 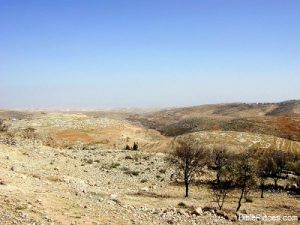 Within a days walk from John’s place of birth, Juttah, Osseaen Essene communes prospered. He was raised in the wilderness areas south and east of Hebron, where a strong Essene influence prevailed.

His Essene studies would have been rigorous, and dedicated, dealing with convictions concerning good and evil and righteousness.  We know John’s later religious preaching puts him outside the Pharisee or Sadducee sects.  John revisits the best the prophets have to offer.  Out of John, a whole new revelation has now surfaced.  Coming ‘in the spirit of Elijah’ launches a firebrand from this soul, contentious and aggressive, and makes it easy to grasp John’s strong impact and appeal.


The major calling of John the Baptist was similar to previous prophets, which is a calling to the return of righteousness.  In John’s case, however, there are two major additions.  The first difference is the clash as he confronts the priestly hierarchy of that day.  This confrontation is serious.  It is directed at the two predominant religious sects, Pharisees and Sadducees.*  “And even now the ax is laid to the root of the tree” is typical of radical Essene language, and conveys a certain ‘outside looking in’ attitude, which condition the Essene seek to rectify.

*Both major sects of Essene, Nazarenes (northern) and Osseaens (Qumran-southern), took issue with the corrupted and unrighteous Sadducaic control of the Temple.  John disavowed the Pharisees if for no other reason than they had become dissolute. 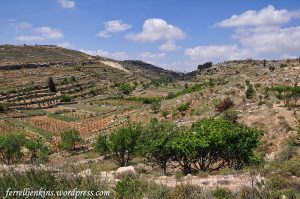 Villages were located on pockets of good land (note vineyard) near where quality wells were available. John would have visited such villages as his priesthood training developed, and would be destinations for his early ministry.

Secondly, it is obvious that John speaks as the forerunner of the Messiah.  He speaks to the issue of preparedness, which can only come about through the repentance within the inner man, best first asserted through a new baptism.  In the like manner, Jesus later says, “I will have mercy [speaking to the Pharisees as to their behavior], not sacrifice,” Mt. 9.13.  Yet again, John tells the Jews to not rely on being the “children of Abraham” as the ticket into God’s grace or to receive the kind hand of God.  In effect, this message requires a new order of consciousness in the spiritual life of Israel, of which John is the opening salvo.

The new message may be to repent, which in itself is not new, but his message is more closely interpreted as repentance from an old way of thinking.  This repentance is specific, and oriented to the coming of the Messiah, meaning to prepare for the mental/spiritual changes Messiah brings.  John seems clear that his repentance deals with heart and mind, not just outward actions and obedience to the law.  John’s repentance sublimates the law, to instead direct toward the inner display of holiness, or spiritual purity.  The mikvah may be for physical purity, but baptism is one for spiritual purity.  The washing clean is for the inside of the man.  Therefore, his ministry questions how the whole of the law is understood and applied.  On both subjects, Jesus will later have much to say.

The above factors separate John the Baptizer from all other prophets.  None of the previous prophets functioned as the forerunner of such a messianic event.  Obviously, John is not brief, but expansive, and clearly states the time of arrival has come.  The Jews of that day hoped for just such a message, a true Messiah-Savior, with the primary benefit of ridding them of the Romans.

John offers a message unusual and disquieting, yet appealing at the same time.  It embroils the people, attracting thousands, and attracts much attention from the Pharisees and Sadducees, the current religious hierarchy who will soon plot against the new message of spiritual renewal.