Many interpretations of the Cain and Abel story have been written.  This effort is dedicated to the enlightenment principles within the story, those that concern Jesus’s teaching of the Way.

As to Cain, Cain will come to epitomize the darkened lineage within the generations of man.  Cain represents Satan, and many consider him the child of Satan; Cain represents the rebellion within, the assault on righteousness; Cain is ungoverned sin, grudge ridden.   Through a chain of events Cain will commit murder.  Cain will become ‘he who wanders’, untethered to any righteous attribution.  Poisoned with anger, he will initiate affliction upon mankind.  ‘Kayin’ means to acquire, and by Cain and his progeny, this lust toward acquisition will culminate in whatever actions are needed to possess lands, wealth, and women. 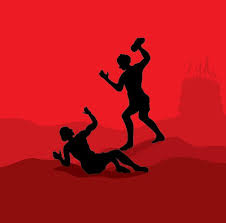 Cain is always associated with Satan or evil 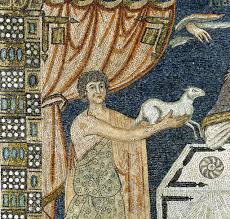 ‘Hevel’ (Abel) refers to being empty, and on the surface, his name interprets as a lack of substance;* also, ephemeral, short-lived.  Another interpretation would view Abel’s emptiness as open or prepared to receive God.   The so-called ’emptiness’ of Abel also indicates innocence and one who can be filled with the righteous spirit of God.  Thus, Abel represents and intimately connects the attributes of Faithfulness and Righteousness (see, Righteous Abel P. 1).

Abel is willing to prepare and sacrifice his best to God.  He recognizes the source of all good, performs a faithful act, and by giving his best establishes righteous behavior for all men.  Abel demonstrates that if filled with faith (faithful) you will tend toward righteous acts.  Abel represents the righteous.  God blesses those who manifest righteousness, and by manifesting thus points to the kingdom within.  Much later in biblical history, Jesus will reveal the kingdom within as one of the great secrets of the Way.

Cain is the first person born, the eldest of the twins, Cain and Abel.  Later, as Cain sees himself as not only first, but foremost, his problems begin.  However, we will begin in chapter 4.1, with “I have gained me a son with the help of God.”

By pronouncing first that she had ‘gained’, Eve names Cain ‘after gain’, or ‘to gain’, also ‘acquisition’.  According to most scholars, it is not just naming Cain ‘after gain’ that becomes the problem, it is also the afterthought, “…with the help of God,” that compounds the issue.  God is mentioned second, not first.  In Eve’s case, she repeats the same mistake as in the garden.  In the garden, God’s counsel is not heeded, and concerning Cain God is removed into second standing.

A common viewpoint interprets Eve as seeing herself as mankind’s co-creator with God, and thus unwittingly puts herself in a presumptuous position: God is mentioned second, and Cain is attached to gain, or as ‘Eve’s acquisition’.  This viewpoint may seem a harsh indictment of Eve, for in a certain way Eve would naturally see herself in a co-creator role.  She can do what Adam cannot do, have babies, and assuredly realizes this special role.

However, the allegory of Cain and Abel illustrates two important lessons.  The first lesson concerns how we name our world, the second describes the nature of man and how he puts himself first, above the requirements of God.

Hubris (ego-orientation) clouds the mind; the mind, thinking it is seeing something else, essentially names ‘good’ for that which is bad, and ‘bad’ is named as good.  The results of the fall become apparent in how Eve names Cain.  Fallen mankind, unawakened mankind, see nothing clearly, but uses his intellect to make up and rearrange what he perceives.  He colors the world to suit himself.  In like manner, to some degree, all people resist humility and lack contriteness.  Later, and after her family is destroyed, Eve will name Seth as ‘granted (to) me’, instead of mentioning her gain.

How do we speak and name before our creations come into being?  From our naming what then may result?  Eve’s misuse of the spoken word reflects the lesson of how we name the world.  Cain also will later speak carelessly and with resentment toward God’s authority, God’s plan.  Cain’s life will later become one of reckless striving for gain, including desires for recognition.  Desire, lust, and wrath will later turn him toward infamy.

The following scripture relates to Cain in many ways: “How can your words be good when you yourselves are evil?  For the words that the mouth utters comes from the overflowing of the heart.  A good man produces good within the store within himself; and an evil man from evil within produces evil,” Jesus in Matt. 12.35, when he speaks to the Pharisees.

As to the judgments man makes of himself, Cain will later tell God that he does not know where his brother is—Cain’s words are lies.  He utters inanities, such as, “Am I my brother’s keeper,” when he knows he has already killed Abel.  These statements infer the mortal or earthbound mind.  Deceits, lies and the cover-up begin almost immediately.

The storehouse within Cain is evil, and as we shall see, Cain will continue to produce evil.  He strives after gain and status for its own sake.  While Abel accepts the bounty and is grateful, Cain is vain and possessive.  Cain becomes distant from God, relying on his own values, and the manner he sees things; while Abel is growing closer to God, and represents and demonstrates the higher pathway and relationship, or the enlightened condition.

The story of Saul and David illustrates the difference between these two states of mind.  Headstrong describes Saul (I Sm. 13.13; 15.11).  Saul continues to move away from God.  David, regardless of grievous faults, in the end, demonstrates a heart after God.  The righteous remnant, David, is preserved. 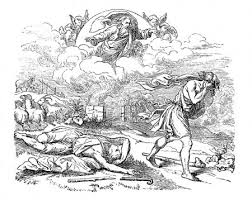 We will see that Cain is adept at reaching
out, but never reaches or looks within.  Consumed with himself, Cain jealously pursues himself: totally self-absorbed, totally self-centered, and totally selfish in a way Abel clearly is not.  In such a person false pride, arrogance, and hubris in his actions cannot be far behind.

Cain lacks the attribute of self-inspection, which Jesus refers to in mentioning ‘the board in the eye’.  For if the kingdom of God is within, Cain never seeks that kingdom.  He cannot look at himself, and as we shall see, neither will he allow the spirit to reflect back to him.  Cain’s conscience is seared, and Cain continues to pursue himself.  Cain appears to seek the most benefit for what he considers the least amount of work, as he will demonstrate with his offering.  In a fashion, he determines his best advantage by slyness and calculation, portrayed as wholly unrighteous, instead of maintaining a more noble pursuit and pathway.

In the teaching of the Way, the story of Cain and Abel represents a schism, unresolvable.  The Way teaches that this schism must be healed, not only in understanding or teaching, but within the daily walk, or pathway.  Even though pathway and teaching are two different things, they should not remain separate.

It does not appear that Cain has accepted teaching or absorbed learning from his parents, and as to pathway, those “who leave the path of uprightness” (Proverbs 2.13) describe Cain quite well.  While Hebrews 12.13, “make straight pathways for your feet,” describes Abel.  Both Judaic and Christian teachings provide a vision of oneness with God, which might be thought of as the final healing of the schism.  Jesus reflects this message of healing the schism in Matt. 5.48, “Be ye therefore perfect (whole),” which means to assume the better righteousness.*  His statement also effectively establishes that animal sacrifice is no longer the way to righteousness or At-One-Ment.  It is the self that must be given over.

Pharisees had largely moved away from sacrifice as well, but they were still bound by legalism.  Jesus, however, goes directly to the man himself, and not an outward act such as sacrifice, nor the currently perceived pathway of following legal rules to gain righteousness.  The Way is a pathway of wholeness (perfect), best exemplified by Jesus himself—completeness, oneness, or wholeness with God.  Matt. 5.48 in the New English Bible reads, “There must be no limit to your goodness, as your heavenly Father’s goodness knows no bounds.

Without uniting teaching and pathway the enlightenment of the Way remains intellectual (legalistic) and hollow.   Throughout his ministry, Jesus spoke to Jews who had no spirit awakened in them, and thus no real concept of the pathway to God.  Jesus resolves this learning problem in three ways.  First, he tells them that the kingdom of God is within, therefore God is with the person always, everpresent.  Second, Jesus then provides the teaching that must accompany such an understanding.  Third, he speaks copiously about how to walk on such a pathway.  For example, he speaks to love first, but if a judgment is required, render such judgment with some measure of compassion.

Jesus’ teachings will become the final interpretation of the Law and the speakings of the Prophets, which the Essene believed was the Messiah’s primary task. The teaching of Belief-Faith will initiate the pathway; Love-Forgiveness becomes a cornerstone for it touches all other attributes of character; after a length of time, Knowledge-Wisdom will be the final assumption.  Deepening knowledge and practice of love and forgiveness will become the key elements (Mt. 7.1-8), not the law.  This pathway was known to the Essene, particularly Nazarene Essenes, and is mentioned in the Dead Sea Scrolls as the Way.

Abel seems to comprehend this pathway notion in some fashion, unlike Cain who seems to have no real direction, no pathway, and otherwise remains a dullard.  In the Cain series, we will observe a continuing decline in Cain, as well as the generations which follow.

I hope you have enjoyed this article.  Feel free to leave comments.  Other related articles are Early History of the Way, Cain & Abel which continues this series, and Jesus the Nazarene.