The enlightenment teaching of the Essene was known as THE WAY.  This teaching became the final interpretation of the Law and the Prophets, as revealed by Yeshua Messiah.  The Way also became the transitional teaching into the early church.

This article details Gideon’s early struggles with authority, accepting the commission, and points the individual to his or her own anointing.

The story of Gideon begins in the Jezreel Valley, Israel, and focuses on those Jews who had fallen away, who had followed the Amorites and their gods, and the tribe with whom they had intermarried.  Judges 6, 7 & 8 relates the story of Gideon’s anointing.

Judges 6.1, “And the children of Israel did evil in the sight of the Lord: and the Lord delivered them into the hand of the Midian seven years [not southern Midianites (Moses), but those now attached to Moabite lands, northward].” Judges 6.3 denotes Israel’s enemies: “And so it was, when Israel had sown, that the Midianites came up, and the Amalekites, and the children of the East (Amorites), even they came up against them; (4) and they encamped against them, and destroyed the increase of the earth, until thou come unto Gaza, and left no sustenance for Israel, neither sheep, nor ox, nor ass.”  Judges, v. 10, “And I say unto you, I am the Lord your God; fear not the gods of the Amorites, in whose land you dwell: but ye have not obeyed my voice.” 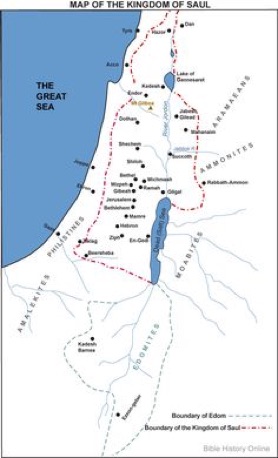 The Amalekites (south) attacked Exodus Jews but were defeated.  They were notorious desert
raiders. The Midianites (bedouins) lived beyond Moabite lands, and also southward.  The people of the East were possibly Amorites, inhabiting lands south of Damascus (Syrian Desert today).  All three groups would be feasting on the riches of Israel’s larder, particularly the Jezreel Valley. The Midianites used camels in their attack force.  Camels were the tank of their day, and no effective defense had been developed. 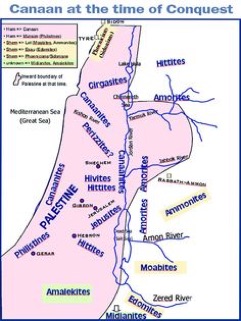 Note Amorites east of Lake Gennesaret.
Amorites were notoriously warlike, and
also fought the Jews of the exodus. At
that time they had conquered Ammonite
lands south to the Arnon River, and still
held some portions of that territory.
Jezreel Valley is in the region of Shechem (map center).

The enemies of Israel are at the gates once more.  The invading forces stripped clean the nearby lands and leave the fertile valley of Jezreel barren. Before Gideon was Deborah, but now the enemy has returned and a new judge must be raised to defeat their armies.  A prophet (unnamed) arrives to remind Manasseh of past greatness, and in so doing chastises the population.  Then, an angel appears before Gideon and says, “The Lord is with thee, thou mighty man of valor” (6.12).

Gideon’s first response to the angel reflects doubt. (13) “If the Lord be with us, why has all of this befallen us?” He questions God and then wonders where the miracles of his fathers have gone, and he assumes God has forsaken his people to the Midianites.  During our own great difficulties, we sometimes think the same thing.  Where are the better times in the past?  Why am I forsaken?  Gideon demonstrates reluctance, essentially he complains.  Nor does Gideon yet understand how or why he has been chosen.

When the time to come forth is before us we often shrink away.  Our previous image of ourselves takes hold, as Gideon will attest, “…my family is poor in Manasseh, and I am the least in my father’s house” (15).  The Lord reassures him, “Surely I will be with thee” (16), but even that is not enough. “Show me a sign” (17), Gideon says.  Gideon has not yet awakened to his true or rightful self.  In terms of the enlightenment teaching of the Way, he still sleeps with a limited vision of himself.  He has not yet truly accepted the anointing—that he will become a man of valor, and that the Lord is with him.  He does not capture his entitlement even as it is being bestowed.

At this time in history all of Israel is crying out for respite.  They live in rocky places and in caves to avoid the scourge of the Midianite armies.  They appeal for an anointed one to come forth, like the judges of old, like Joshua.  As with Israel then, and as so often with us, when the crying out is heard, but if chosen would we come forth?  Much like Gideon, how much doubt and denial will come into play before we are willing to receive our anointing?

Gideon is lost between the past and the future.  Opportunity sets before him, yet grasping, it eludes him.  Considering the woes of Israel, how much time would Gideon have already spent thinking about these yearly attacks?  Certainly, quite often.  He also perceives himself as the lowliest of the low, for the tribe of Manasseh is the least of the tribes and he is the least within his own family.  How much time has Gideon given to his own notions of lack, not only within himself but helplessness in the face of the Midianite warriors?  With the exception of perhaps a few members of his own family, whoever has encouraged Gideon?  Whoever has called him worthy? 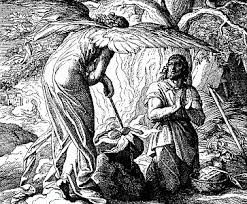 Even so, God has chosen Gideon as an active principle, for underneath resides a man able to be called unto the spirit of God.  “Fear not the gods of the Amorites,” the angel tells Gideon.  For us, this reveals the failure of worshiping false gods or beliefs.  We worship the false god of abandonment, or desertion, much like Gideon.  Else it is the penchant for sadness, recrimination (why, why, why?), or a useless revision of the past that you perform.  In practicing the Way the seed to clear the field must now be sown, and the Word must be spoken, leading to the removal of the hindering attitudes of mind and heart.

The manner in which God tells Gideon to perform this minor miracle (of removal) is to prepare a sacrifice for Him, that is, to make an obvious commitment.  This is a sacrifice after the manner of the day.  The commitment could have been a firm statement of dedication and prayer.  Each person must see their commitment statement delivered.  It must be honest, sincere, and from the heart.  This step begins to break the chains that bind.

Now following the text, the Lord orders Gideon to prepare a kid, unleavened cakes, and he also brought the broth.  After the broth had been poured over the meat and bread, the angel then holds out his staff and from the rock comes flame to consume it all (21).  The angel then departs.  Gideon now accepts that his commission is real.

It does little good to seek your anointing, but be unwilling to give credence and time over to the benefactor:  Gideon recognizes the Lord, v. 24, “Then Gideon built an altar there unto the Lord.”  God imparted the next important step and directed Gideon to build up an altar.

For Gideon, the attribute of gratitude and recognition came after the manifestation presented by the angel.  For us, gratitude can come beforehand. Gratitude brushes away the ‘false gods’ of our own notions, our own lack, much as we now see Gideon demonstrate.  The experience of Gideon faces all of us who now live in these times of great change, perplexities, and doubt.  What indeed must each person be shown before his or her mission statement, or the commission God has provided, becomes real?  Many pray, and many prepare, but only those who step forward can be accounted for.  Gideon sees himself as the most common of men, within an ordinary family, the least influential person of the Israelite tribes.  Yet he, like many of us, has been chosen.  Gideon’s first test is about to arrive. 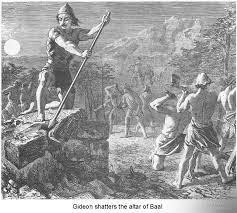 In the next few scriptures, the root of Israel’s problem is revealed.  Once inhabiting Canaanite lands the Israelites had syncretized the worship of Yahweh with that of Baal, as well as his consort the goddess Asherah (Sumerian-Lilith, Egyptian-Isis, Babylonian-Astarte).  Raised in that manner, for Gideon these gods would hold a kind of equality with Yahweh.  The angel’s voice directs Gideon to cut down the altar of Baal, the post of Asherah, and the grove of trees beside it.*  After building an altar upon a larger rock nearby, he uses the wood to build the fire that will then cook the bullock he was directed to sacrifice (25, 26).

*The grove would be used for sexual rites.

Unknowingly, Gideon and the Israelites were operating under the authority of mixed fruit, that fruit of the garden containing both good and bad. The people of Israel were in effect trying to play it safe, at once keeping Yahweh-the-god-of-their-fathers, yet mingling with Canaanite women through marriage, then weaving Baal worship into the mix so as to become more acceptable.  Asherah, a fertility goddess, would also come in handy.

A true commitment is lacking, and such watered-down behavior can seldom reap a good result.  The reforming of ‘his father’s house’ is much about what Gideon is doing, and reminds us that we need to reform our own house, a more proper vessel for the spirit to abide and move through our new anointing.  ‘Old and desolate’ go onto the fire; ‘new, fresh and recommitted’ gains new life.

In the practice of the Way and much as we see in Jesus’s ministry, commitment holds a primary place.  Many faltering steps can and do occur, much as we witness in Peter denying Christ three times, but true commitment offers the opportunity for renewal, regardless of the previous failure.  Israel, through Gideon, now arrives at that opportunity.

By Gideon’s actions, he establishes the supremacy of Yahweh, obliterates Baal and Asherah, and returns to the calling of the One True God.  This faithful step may be minimized by some persons, for, after all, an angel demonstrated before Gideon, so how much faith may truly be needed?  Yet, Gideon fell to work by the dead of night and even while fearful, must with the coming dawn still face the wrath of the village.  He has torn down their god.  In effect, regardless of his fears, regardless of what he once beheld as his own great lack and unworthiness, Gideon witnesses God, and Baal is rendered.  The pole of Asherah goes up in the fire, even as the bullock roasts over the flames.