This article deals with Gideon’s assuming the mission within his anointing.

Soon after Gideon’s destruction of the Baal/Asherah alter, the Midianites encamp in the valley of Jezreel, and the Lord calls upon Gideon once more.

In Judges 6.34, “But the spirit of the Lord came upon Gideon, and he blew the trumpet; and Abiezer was gathered after him.”  Gideon gathers the neighboring tribes of Asher, Zebulun, and Naphtali.  Gideon has been anointed to enter into battle, and those assembled await orders.  Gideon’s first action, however, was not to prepare for battle. He did something else instead.  Gideon will take two days to confirm his anointing.

The story of the fleece, or what is known today as ‘throwing out a fleece’, or ‘fleecing’, is related next.
Jg. 6.36-40: “Gideon said to God, ‘If you will save Israel by my hand as you have promised—look, I will place a wool fleece on the threshing floor. If there is dew only on the fleece and all the ground is dry then I will know that you will save Israel by my hand, as you said,” (38) And that is what happened. Gideon rose early the next day; he squeezed the fleece and wrung out the dew—a bowlful of water. (39) ‘Then Gideon said to God, Do not be angry with me. Let me make just one more request. ‘Allow me one more test with the fleece. This time make the fleece dry and the ground covered with dew.’ That night God did so. Only the fleece was dry; all the ground around was covered with dew.” 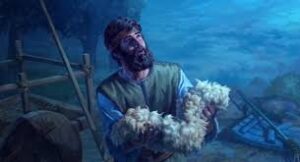 The superficial criticism of Gideon’s behavior is his continued reluctance, and doubt.  Although testing God’s will was a common practice in ancient times, it is also true that Gideon might have shown greater faith.  Yet, there are reasons for Gideon’s reluctance.  Gideon perceives his circumstances.  The northern provinces (Israel) suffered much more influence from Canaanite tribes than mountainous Judea, for Israel contained the breadbasket of the Jezreel Valley.  With the underlying distraction of mixed-gods worship, combined with weak civil authority, Gideon is not the strong and vibrant biblical leader we have been taught to envision.

Gideon is not rushing into battle.  He is securing his position, both in his mindedness and preparations, and he probably must further contemplate exactly what he is called to achieve.  As with any of us who may be called or anointed into a certain task, contemplating our situation and the time of consideration may lend more value than righteous fervor.  Without such grounding, we may find ourselves midway through and suddenly bereft of faith or strength.  Gideon may not so much doubt, even though what is now before him is a far greater task than his first commission.  Yet, when the anointing actually arrives he does not embrace it in the wholehearted manner we normally think the anointed would.  Here we find an issue not often discussed, and one which Gideon must certainly weigh heavily.  It is the issue of, what is God really after.

God’s pursuit is the reunifying of a nation, Israel, under His leadership and promise.  Two events must occur: the first is the destruction of false gods, and the second is the removal of the wrath of the enemy.  Israel cannot be free until both are accomplished.  So it is with everyone. Gideon may not know or have imparted to him this awesome twofold task, scripture does not say, but it does seem likely he feels the pressure and the weight.

When great tasks are at hand a man must reach confirmation within himself, enough so as to release the power of God from within.  Many pastors and teachers refer to this as ‘coming into an agreement’.  Gideon is all about doing just that.  However, he understands the agreement cannot be after the manner of words only, for a great task stretches before him, and it must be an agreement that begins to build substance within him.

Some men or women may already feel confirmed, others may not, and so the latter condition is upon Gideon.  When Jesus is anointed his first decision is to go east into the wilderness, and once there become confirmed and settled for the task before him.  Gideon, likewise, cannot afford to fall upon his own obstructionist nature, sabotaging himself, he must become confident in a spirit-settled way.  Gideon cannot afford to press forward full of his own blustering confidence, then run into his own lack of character and resolve.  He cannot afford to discover doubt while in the midst of battle.

With the syncretism of false gods, there will arrive a divisive nature.  The ‘eye is not single’, and the light on the hill cannot shine.  The weakening agent of a double pathway can lead to many doubts, loss of inner fortitude, and confusion.   The condition of anointing is not the same as performing within the anointing, or ministry.  In part, Gideon lacks sensibilities toward wholeness.  In his mind, what he sees and what he doubts betray him.  He has yet to put his senses in place with wholeness.

The teaching of the Way emphasizes wholeness with God, or to “be ye perfect (whole),” Mt. 5.48.  Much as Jesus relates wholeness or completeness throughout his ministry, it is also recommended that meditation with God, contemplation, or quiet time, be taken.  Such time bolsters and restores the soul.  If it is Gideon who is to accomplish this task, then it is he who must be sure, and once settled he must thence move into his anointing through action.

During this process of unification faith always comes into play.  Faith may unify (wholeness) but can also lead to confirmation, and certainty.  Faith, after all, accounted for much of the anointing Jesus operated under and allowed him to move with certainty within his ministry.  Much like faith itself, anointing is at once a static condition but also moves, making faith and anointing inseparable companions.  Having faith to move mountains is laudable (Mt. 17.29), but like us, Gideon’s mountains are truthfully the mountains within himself: mountains of doubt, mountains of procrastination, they could be of any number of conditions that plague mankind.  So lies this condition within Gideon.

The anointing will begin to winnow the wheat from the chaff and is one reason many people secretly do not wish to receive the anointing.  They fear the changes that must be made, some superficial, but oftentimes they run deep to the root of the person.  Not all is settled at once, but the initiating energy of the anointing will continue to work and change their will.  Gideon probably senses he will become a different person when all is finished.  He must become settled in the spirit.

Gideon used a fleece to get his confirmation from God, and not only once, but twice!  Yet, receiving and fulfilling are not the same.  To illustrate we go back to earlier in the story, and scripture tells us this,
Jg. 6.25-27: “That same night the Lord said to him, ‘Take the second bull from your father’s herd, the one seven years old. Tear down your father’s altar to Baal and cut down the Asherah pole beside it. Then build a proper kind of altar to the Lord your God on the top of this height. Using the wood of the Asherah pole that you cut down, offer the second bull as an offering. (27) So Gideon took ten of his servants and did as the Lord told him. But because he was afraid of his family and the men of the town, he did it at night rather than in the day.”  Gideon received his anointing, but accomplishes it in an awkward manner—he does not function in the light of day and before all men.

The fulfillment of God’s complete anointing for Israel is at hand, and no such awkwardness can be allowed for this task.  Now, and of his own accord, Gideon must be sure.  The first mission he has accomplished, but the second stands waiting before him.  I wonder what Gideon would have done if God had not given him another sign.  He had already blown the shofar to unite the tribes.  Would Gideon have just sent everyone home?  We will never know.

Gideon gives us a lesson all should remember.  Gideon’s first given task was accomplished more as a crime, in the middle of the night, surreptitious, than an action taken at God’s direction.  If you hide, then the fulness of the work is hard to make manifest—Gideon employed connivance.  The full measure of Gideon’s first anointing was not demonstrated, and soon after we find in v. 29, “They (the townspeople) asked each other, ‘Who did this?’ ”  In other words, they had to go looking for the culprit.  Gideon’s father spoke up for him and saved him, but now Gideon is in a much bigger arena, and all must happen in the light of the day.

For us, the question is, is Gideon’s first attempt at fulfilling his anointing the same as how I pursue God’s direction in my own life?  Do I move by night, partially hiding or concealing myself, or do I move by the full light of day?  In which manner is my anointing undertaken?  Individuals, pastors, and teachers face this every day, though they may not see it in quite this manner.  We see in Gideon a “mighty man of God,” at least as most tell the story.  But when the details are observed, underneath remains the story of a man who has doubts about what he has clearly been shown, but now must make himself full and ready to complete the task.

If one is to seek anointing in some part of his or her life, then it must also be a time of preparedness for stepping forth in the spirit of that anointing.  Otherwise, doubt of itself becomes a spirit killer.  It is through the use of the fleece that Gideon removes his doubt.  Without coming to terms with doubt and becoming settled in the spirit, faltering steps will otherwise begin to decide the issue, and the direction of the actual anointing will begin to unravel.
* 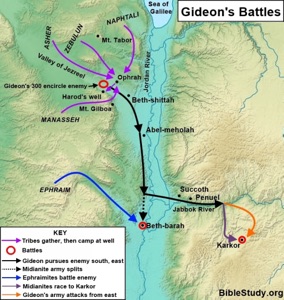 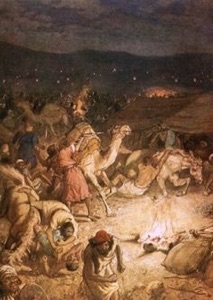 Gideon and his united tribes defeat the Midianites and “all the hosts” (Jg. 8.10) who were with them.  Continuing to pursue, the enemy becomes further scattered and rent.  Midianite kings are slain as Gideon completes his anointing with a kind of vengeance, or perhaps a serious and purposeful dedication.  How Gideon does so is worth reading in chapters 7 & 8.  But for now and for this text, Gideon has his victory, but through Gideon so God has His victory as well.

Perhaps the lessons of unity and purpose with God become what we are left with.  Throughout Jesus’ ministry, we see both factors at work, a knitting together of those who are chosen– or unity– as well as those who later come forth and join the standard—fulfillment of purpose.  Unified, and with purpose within anointing, Gideon finally achieves God’s complete plan.

The final phase of Gideon’s story must, however, be accounted for as a failure.  The next installment is Gideon’s Fall.