Biblical names are important and are intended to indicate what a person stood for, or what he or she may do.  John the Baptist translates as ‘the Lord is gracious’, Mark 1.4.  John is designated as being “filled with the holy spirit even from birth,” Luke 1.15, also translated as ‘great in the eyes of the Lord’, which is scripturally taken as a sign of grace relative to John (see Nazarite John).

Consecrated a Nazarite at birth, Samuel later faced encroaching challenges by the Philistines.  ‘Heard of God’ is his namesake. “…in favor both with the Lord and with men” (Sam. 2.26).

Hannah’s poetic song of joy at the birth of Samuel:

“Talk no more so very proudly;
Let no arrogance come from your mouth, 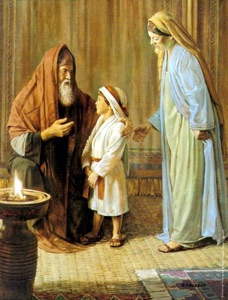 The most notable example of proper naming is Yeshua, which means ‘Yahweh delivers’.  Yeshua, in turn, derives from Joshua, Joshua meaning ‘Jehovah is salvation’.   Matt. 11.1-3, John the Baptist had his disciples ask if Jesus was the Anointed One, the Christ, which indicates both names of Yeshua as Deliverer and Savior, meaning to “save his people from their sins.”  We have ‘God is salvation’, or Joshua, followed by the completed act of ‘God delivers’, or Yeshua.  The naming of Yeshua is given its full meaning with, Immanuel, “God with us,” which is written in Matt. 1.23.  These three names, ‘God is salvation’, ‘God delivers’, and ‘God with us’ leads us to the fulness of Christ, or the Deliverer, or Messiah (Anointed One).

In Jesus’ times, the Jews believed God would deliver them from the Romans.  Previous to that time it was the Greeks.  In between, Jews fought the religious civil war of Pharisees versus Sadducees.  But it seems clear Yeshua was sent to deliver the Jews from themselves, and as it turns out this included the laws that limited and bound them.  The teachings of the Way illustrate that obedience to the law is a good thing, but in itself, the law does not set you free.  The law comes to indict, and of its nature can never hold the key to freedom.

In contrast to the law, Jesus enlightens us into a whole new presence or standing with God, or ‘God with us’.  Thus, the breaking of the law which is equated with sin, as the Pharisees, Sadducees, and scribes believed, becomes removed as the final arbiter of our relationship with God.  In the final teaching of the Way, grace stands above the law, and mercy shall be applied before punishment is imposed.  Forgiveness becomes paramount, as the Parable of the Unmerciful Servant points toward (Mt. 18.23-27).  Conversion initiates the process, but enlightenment into the spirit of God, the renewed mind, completes the journey.

The power in the name Jesus, or Yeshua, is derived as the letter Shin (feminine) is added to Joshua.  Holy Shekinah, the root of which is Shin, 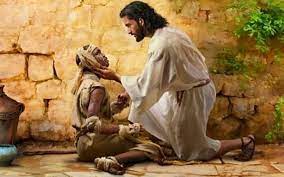 or Holy Spirit, these very similar terms represent divine presence and power, with the name Yeshua implying an embodiment of this presence and power.  Yeshua is masculine and feminine.  Holy Shekinah more specifically points to awakening, or one who has awakened to God within, or the kingdom within.  Using the name Yeshua thus conveys authority (God-being within) and power (God-being expressed) through invoking his name.  The use of the name Jesus (taken from the Greek) as Yeshua’s name is also an appropriate usage according to most theologians.

Throughout the written work of the Hebrews, as well as in the oral tradition, the provision is to not speak the name of God, YHWH; else you might improperly invoke His name, after vanities or personal desires which have no spiritual basis.  Instead, the biblical name “Adonai” (Lord) was most frequently used.  By contrast, in the ancient world, pagans believed they could affect the gods through various sorceries, incantations, secret chants, or making an image of the god they appealed to.

The presumptive behavior of pagan worship was to name a god in order to control the god or make the god do the sorcerer’s bidding.  This approach puts the man in a god-like position.  As all of the ancient gods were open to man’s dictates through the magic arts; YHWH would not allow Himself to be put in such a class.  By pronouncing the first commandments* He separates Himself from all other gods.  In doing so the lesson of authority within naming, and the order of events, becomes illustrated once again.  “I am who I am” (Ex. 3.14), also reserves God as the first order of all events.

If a man may not put another god before YHWH, then he may also not put himself before Him, nor rename YHWH into a pantheon and thus diminish Him, nor take command over Him.  By contrast, pagan people became bound up in their gods by this misdirected use of speech, chants, the incantations (see Enosh).  The Pagan gods also required sacrifice, sometimes human sacrifice.  Those religions that require human sacrifice are reduced to bloodied death cults, regardless of how they present specific religious tenets or broad-based doctrine.  The commandment, “You shall have no other gods before Me,” orders the hierarchy, as Yahweh is the One True God.  In itself, this commandment destroys all previous religions.

The naming of the Father by Jesus as ‘Abba’, actually translates as Dad or ‘Daddy’.  Jesus relates to God so closely and with familiarity, so tender and so dear, that he calls him Daddy.  As Jesus prays in Gethsemane he might as well have prayed, “Dad, what do you want me to do? I’m not sure what is to happen next, and I need guidance.”  Such a close relationship, also relates to just how close our Father is to us.

Nimrod the ‘Mighty Hunter’, is a biblical figure not well understood.  He was a mighty hunter alright, a mighty hunter of souls, and for this reason, he is despised throughout scripture.  His strength developed into prowess, attributing to himself power not inculcated relative to God, but to himself.  His biblical name identifies with Cain (see Cain & Abel).  “He [Nimrod] gradually turned the government into a tyranny, seeing no other way of turning men from the fear [reverence] of God, but to bring them into a constant dependence upon his power,” Josephus, Ant. 1.4.2.

Essentially, Nimrod is proposing the first public works program.  And they said, “Come, let us build a city, and a tower with its top to the sky, and make a name for ourselves; else we shall be scattered all over the world,” Gn. 11.4. 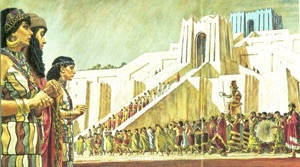 Amid Nimrod’s building program, the people essentially renamed themselves as the ‘earthly powerful’, not the spiritually powerful.  Nimrod encouraged defiance to God and then garnered the envy of other men, and it is under this influence the people followed.  They were trying to outwit God.*  After their imaginations, they entered into a kind of unreality.  They undertook the building of the ziggurat in their name and to attribute self, dismissing God.  The construction of the ziggurat entails an act of rebellion.

*They built the ziggurat to escape another flood if sent again by God.

Nimrod was there to coerce the people, to unify them by such a commitment.  To illustrate the folly of such thinking the Bible shows how they fell into arguing, such that one could not understand the reasoning (the tongue) of another.  It is also true that those of the city had come from diverse groups, much as we see in cities today.  However, the primary lesson remains that without God there is no intrinsic power to unify; the unification is nothing more than an intellectual construct, which in this case comes by connivance.

Intellectualism may reach an agreement but does not necessarily unify.  Often intellectualism pushes and ‘forces the ground’ (see Cain and Abel) and may lack graceful connotations.  Issues of motive come into play.  Nimrod conquered Assyrian lands, well north of Babylonian regions.  He suppressed godly notions even of those devout, by pressure, and coercion, and essentially forced those people to confront his power.  Intimidating, to say the least.

Contrarily, we do not pursue in our name, our righteousness, we instead pursue the spirit of God, His righteousness.  The enlightened teaching of the Way first proscribes obeisance to the godly authority.  It is from godly authority that all other authorities must then derive.  Using the self as the standard, and with intellectualism not wedded to spirit, many ventures and many false trails will be pursued.

Nimrod’s heritage is very suspect, being the grandson of Ham; Ham being the son who profaned his father, Noah.  Nimrod is the son of Cush, usually described as Ethiopian, or southern Sudanese.  However, Nimrod appears in the Hebrew Bible as the king of Shinar and ruled over much of Mesopotamia.  “…they journeyed from the east [not the south], that they found a plain in the land of Shinar” (Gn. 11.2).  “And the beginning of his kingdom was Babel, and Erech, and Accad, and Calneh, in the land of Shinar,” Genesis 10.10.  He gained his ascendancy by conquering (see Cain VI), but not by heritage, and was not a rightful king.

Due to his unrighteous assumption of power, he always feared Shem and the sons of Shem (Gn. 10.21-32).  It is Shem’s lineage through Terah that Abram (Abraham) becomes born.  Forced to leave Ur largely due to Abraham’s belief in one almighty God, 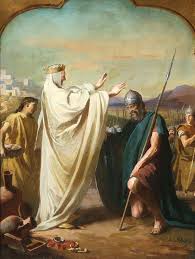 Terah and his family leave Ur and settle in Haran.

This one-god belief on the part of Abraham also explains why generations later the four kings from the north (Gn. 14.5-7) raided extensively in territories around Sodom, Gomorrah, Zoar, Zeboiim, and Admah (Gn. 14.1-2).  Even after many years, the kingly descendants of Nimrod were looking to eradicate the most notable figure in the family of Shem, Abraham.  When they could not find Abraham they were glad to take Lot as a captive.*  Nimrod is described as sly and deceitful, and because he is a descendant of Ham, cursed (named) by Noah as a family of “servant of servants” (Gn. 9.25-27).