Cain’s rash decisions and behavior destroy any hope of spiritual renewal or pathway. 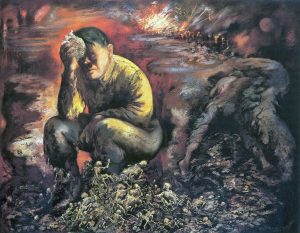 Now that Cain has killed Abel: The Lord said to Cain, “Where is your brother Abel?”

God’s question is not an indictment as so many think, it is to provide Cain with the opportunity to confess.  This is the third time God tries to renew Cain.  First, he shuns Cain’s offering, which is to awaken in him spiritual, moral, and ethical standards.  Second, he asks Cain why he is distraught; God mentions sin but counsels that Cain can be its master, and essentially offers a helping hand.   Third, he offers Cain an opportunity to confess his crime.  God is a loving God and gives Cain every chance.  If Cain can bring himself to confess, there is still hope that God may work with him, and help him.  Recalcitrance or disdain for God always leads to deeper misery, as Cain will discover.

According to Josephus, at least a few days have passed since the murder.  Cain’s guilt must be growing, the pressure increasing.  God questions Cain about no longer seeing him and his brother conversing.  Again, God is trying to open a door for Cain; God is lightly probing in His questioning.  The proper response for Cain would be to finally admit what he has done.  Instead, he challenges God with a question of his own and rashly replies, “Am I my brother’s keeper (guardian).”  Cain hurls his defensive question, ‘Am I to keep track of him?’  The denials and excuses begin immediately.

Yet, Cain is the perpetrator, not the protector, and Cain knows all along that Abel lies in a field, probably hidden under some brush.  How disingenuous can anyone be?  With this last statement of bravado, the many sins of Cain lay bare, both of commission—of attitudes, motives, and actions—and omission, which includes the genuine love for God, love for his brother, and a willingness to be honest with himself, to confess.

Confession proofs out personal responsibility and provides the opportunity for change, which leads to repentance.  If the deed is not out in the open, confessed, how can anything be done to address the issue?  It is good, to be honest with oneself.  Taking responsibility for improper actions, confession thus becomes a powerful enlightenment principle within the Way, for it initiates a positive rebuilding of the soul.  Confession allows avenues through which the spirit of God works, whether that work is seen or unseen, or the works are accomplished in the silent places of the soul (Unconscious Growth).

Yet, within our story, and much like Cain’s parents who also tried to explain away their actions, Cain cannot come to terms with his actions.  Like many of us, Cain tries to hide behind an aggressive posture.  Nor does he believe nor understand that his actions have led to horrific consequences.

Abel’s blood represents the spirit of God and true life, or righteousness, and Cain has shed that blood.  Abel was the righteous remnant (see, Righteous Abel P. 2).  Physical life is precious, but spiritual life is even more precious, and neither should be squandered by unrighteous actions.  Scripture is replete with lessons concerning the damage anger can do.  The story of Cain and Abel points to a lesson: never cut yourself off from God, from righteousness, by wrathful speaking or behavior.  Many of us have rued the day of their wrathful speaking or rash behavior, and soon Cain will discover the same.

This is the second time God has cursed the ground due to man’s actions.  The first is in the garden, v. 3.17, speaking to Adam, “Cursed is the ground for your sake; in toil (also, in sorrow) you shall eat of it all the days of your life.”  God mentions ‘thorns and thistles’ and ‘in the sweat of your face’.  Even though the land will still yield, disobedience will always garner more toil in the long run and becomes yet another enlightenment principle portrayed within this saga.

Another principle also comes into play.  It is the principle concerning exactitude under the Law of Cause and Effect, or the Law of Rectitude.  Exactitude even unto every jot and tittle (yud or stroke within the OT), just as Jesus mentions in Matt. 5.18, must be fulfilled, and this is precisely what happens here.  Cain’s livelihood, unlike Adam’s, is completely taken from him, but not for the obvious reason of wrathful punishment, as so many presume.  Adam and Eve threw away their spiritual heritage, but Cain murdered the righteous remnant God has sown upon the earth.  Nor would Cain come to terms with his actions.

How is this curse to be implemented?  God’s decision oversees both the spiritual world, or above, and the physical world below.*   God delivers Cain into a desert land, this land of Nod.  Even though destined to wander, yet not considered a nomad but more correctly a fugitive (Gn. 4.12), he later settles into a more verdant area near the Euphrates.  Cain seems no longer interested in pastoral life. 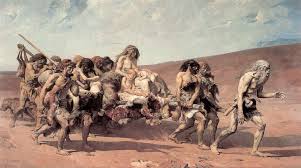 A fugitive from whom?  Nothing and no one would be

pursuing him but the higher laws of God.

The ‘Law of Accountability’ will leave Cain separated from God, then left to operate within his corrupted reasoning.  The rejection of God leaves Cain’s efforts wedded only to Cain’s judgment, but does not source the spirit of God.  Cain has designated himself as a fugitive from God.  The fugitive status leaves little room for where to run next, whether in the physical world or considered spiritually.  Cain will spend the rest of his life running from himself, and the next verse indicates this very reality.

Verse 4.13: “Cain said to the Lord, ‘My punishment is too great to bear!  Since you have banished me this day from the soil, and I must avoid Your presence and become a restless wanderer on earth—anyone who meets me may kill me!’”

By being banished from the soil, Cain’s livelihood is removed.  He not only killed Abel, but he also disrupted the wholeness of the family, as well as disrupting the issue of many sons and daughters from Abel and his wife.  By murdering Abel, Cain has destroyed a portion of the family of man.  Blood spilled by murder yields no crop.  As to the mark of Cain,* given so Cain will remain protected from others—even though Cain remains in sufferance, God allows for mitigation.  Cain will be allowed to live his life but without the edification of God.  Perhaps the worst curse of all, Cain will remain Cain.

*Thought to be an “X” or cross mark, the last letter of the Hebrew alphabet.

The second curse, that he must avoid God’s presence, cements the fact that Cain’s character fits the pagan world he discovers in Nod—a world of uneven prospects, though not necessarily a world yet filled with violence or war.  Severe separation or loss of this kind leaves a vacuum in consciousness.  With suffering and wrath, and violence to fill this void, Cain trudges on.

Restlessness and wandering, the third curse, does not infer restlessness and wandering only in the physical world.  Cain will remain restless in his soul, never knowing any true peace, producing a sodden and unresolved soul-nature.  Cain’s punishment is complete, just as his action against Abel was complete.  Cain and his ancestors will bring change to the face of man.  Yet, these changes will lead to hubris within Cain’s lineage.  A strong right arm will lead Cain as well as his ancestors, into the curse of all curses.

I hope you have enjoyed the continuing story of Cain and the enlightened principles of the Way.  Comments are welcome.