Gideon’s Fall begins with Gideon’s reluctance to embrace the full measure of His anointing. 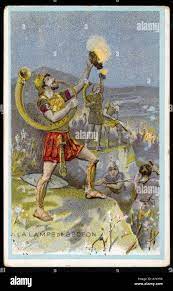 Gideon’s fall comes soon after his victory.  Gideon takes two actions that are contrary, one to the other: he turns down kingship, but also fashions a golden ephod (figure).  As to the people’s offer of formal kingship, on the surface, this is admirable, for the Israelites were not supposed to have a king, unlike the people surrounding them. They were to rely on God (Ex. 3.13-15) and rely on their high priests and prophets, such as Samuel.*  Scripture tells us the people demanded it to be a hereditary kingship as well (Jg. 8.22).

*Samuel is accredited with writing the Book of Judges.

Gideon might have served quite well as the king, even while accrediting God.  After all, Gideon was the one anointed by Jehovah.  Who better to be king, if king there should be? In v. 8.23, Gideon places the Lord at the head of his nation, “I will not rule over you, neither shall my son rule over you: the Lord shall rule over you.”

Gideon does not see himself in the kingship position but will accept leadership as a judge, which would require he is brought into the priesthood.  Some scholars believe he functioned as the High Priest.  The making of an ephod would normally be ordered or made by a high priest, much as we see concerning Aaron in Exodus.  Unlike Aaron’s situation, however, Gideon is asked by the people to be king, thus establishing order, unity, and strength.  This is so armies could be rallied should they be needed again. 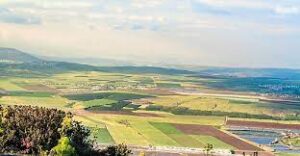 The people of the Jezreel Valley suffered years of assault by the nomadic tribes.  How badly would they seek leadership from what was now recognized as a strong, blessed, and noble family?  How odd that Gideon would not accept kingship, which was within his province, but proceed to order the making of an ephod, wherewith he had no province to do so.  At this point, Gideon seems to be about doing what he considered his own best resolutions.

It is peculiar that there is no mention of Gideon seeking God on this matter of kingship.  When matters concerning advancement arrive, that is the time for prayer, not reaction.  Gideon’s self-effacement occurs at an inopportune time, for it does not allow him to do the best action, but instead sets up a much worse action.  At a time of promotion, wisdom dictates great care be taken, for even those things you have most cherished in yourself can stand in the way.  Forces you know not of may suddenly array themselves, values of unworthiness, almost any form of perceived lack, and other attitudes which don’t belie leadership.

A second decision Gideon makes will lead to big problems, not only within the nation but within his own family.  Gideon then proceeds to collect the captured golden earrings of the enemy.  Noted for wearing earrings, the Ishmaelites would have many of them.  Each man brought forth his earrings from slaughtered foes.  These along with other gold were cast into an image—an ephod, a sacred object.  The ephod is a functioning memorial, it is to be used.

Of what use is an ephod?  An altar would be constructed for the ephod, and it would almost certainly be used as an 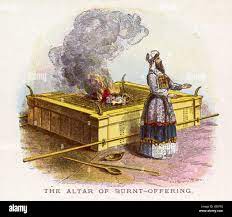 oracle.  Prayers and offerings would be made when a special request might be granted, or for special counsel when an important matter might be in question.  It might be used during times of celebration.  It is considered a conduit toward God.   This is a false idea.  Man is intended to seek God directly.  Regardless of its use, however, one outstanding point survives: it should never have been fashioned in the first place.  “…and all Israel went thither a whoring after it,” Judges 8.27.*

*Joshua recognized the danger of using teraphim (oracle figures) or an ephod (which may also be a cloth coat and adorned and worn).  Joshua 24.16-28 (23), “Now therefore put away,” said he, “the strange gods which are among you, and incline your heart unto the Lord God of Israel.”

Here lies Gideon’s situation.  Gideon turns down his rightful province and instead replaces it with a return to the past.  It is true that thereafter Israel rested in peace for forty years, and until Gideon’s death.  But, the seeds had been sown.  Instead of wiping out syncretism once and for all, somehow Gideon manages to not understand this one great lesson: when new or greater achievements have been made, not only must the past be laid aside, but a new standard will be established, and each person must live up to that new standard.

The offer was to rule.  Although Gideon performs as a judge, he does not accept the formal kingship title.   Gideon essentially takes the position, or the sitting place, of a leader of sorts, but not a king, but not a true prophet, either.  He is one foot in and one foot out!  Where does this noncommittal stance leave the people?  Why has Gideon returned to his former reluctance?  Look to where it leads him. 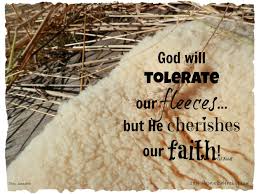 As soon as v.33, Gideon died, “And it came to pass, as soon as Gideon was dead, that the children of Israel turned again, and went a whoring after Baalim, and made Baal-Berith their god.”   In the story of Gideon, there are many lessons for the Way.  The first concerns the calling and obeying the calling.  The second is to proceed with consideration and with prayer.

Gideon threw down a fleece.  Certainly, he would have prayed, but he also laid down a test for God, and perhaps that was the beginning of his difficulty.  Even though this was a common practice for Gideon’s times, as were ephods and teraphim, the practice also contains pagan roots.  Third, even as brave as he was, he allowed the pagan root to remain.  He did not complete his mission.  Yahweh is once again the god of special events, but the god of everyday remains Baal, the sky god.

Gideon knows, but he also knows-not.  For all of his brave deeds, Gideon stands witless before circumstance.  I wonder how many of us have created the same experience for ourselves?  By deferring as did Gideon, we are left with the smaller, uncompleted portion.  Years later we become witnesses to our own fallen kingdom.  As simple as it may sound, sometimes the knowing is simply to walk through the anointed circumstance until the end.  Gideon never saw himself as a king, but God did.  Gideon probably did not see himself as he who restores true worship unto the One True God, but God did.

This ephod can serve as a connecting point to God, but it may also represent a pagan worship symbol or a pagan practice, likened to the golden calf of Exodus.  Ephods and teraphim seem to plague the Israelites.  However the ephod may be understood, it still leaves Gideon one step away from God, and noncommittal, which should remain a good lesson for those who practice in the Way.  Gideon was unable to pick up the full mantle of his leadership— he ran away from responsibility, or better yet, he reasoned it away, with the result that Israel, the whole nation began to follow after.

ANOINTING and the WAY

By contrast to the teaching of the Way, it seems so many are willing to sell their life away for trinkets (golden earrings of the Midianites), make these trinkets their god, and then worship at the altar of them.  The question begs, where does the anointing of the Lord reside in the everyday person?  When will a person allow it to be bestowed?  And would each person be willing to follow such an anointing?  The graciousness of the Lord resides in you, yet how many see the blessings of everyday life, and from a blessing into the anointing hovering over their head?

Throughout his ministry, Jesus teaches, directly and indirectly, concerning the anointing.  By the greater light visible, ‘like a dove descending’, God anoints Jesus.  God’s voice cascades over those present and provides the basis for the scriptural interpretation concerning Jesus’ anointing and identity—a son in whom God is well pleased.  Jesus sends the disciples into the land so that they may also heal (Mt. 10.1), casting out unclean spirits, just to give one more example of the pervasiveness of anointing throughout Jesus’ ministry.  The final formation of the church speaks to the truth that anointing precedes great accomplishments.

As to the anointing within an individual’s life, love and forgiveness set the stage. Mt. 6.14-15, to “forgive men their trespasses”; Mt. 5.24, “First be reconciled to your brother, and then come and offer your gift”; Mt. 5.44-45, “love your enemies…that you may be sons of your Father in heaven.”  Followed by v. 48, “Therefore ye shall be perfect, just as your Father in heaven is perfect.”  ‘Perfect’ is often interpreted as ‘obedience’ within the Matthew perspective but is also considered as ‘wholeness’ with God.  All of these scriptures, and many more, attribute themselves as leading to a blessed, if not an anointed life.

Wholeness does not seem the task accomplished by Gideon.  Gideon’s return to reluctance becomes the plague of many societies today. Perhaps old habits die hard.  Much as Gideon deserves credit for resisting a formal kingship, he is willing to take on other trappings—he becomes a judge.  Even though seeing the anointing of God work out in his own life, Gideon remains split apart, not whole or complete in his commission.

Gideon’s disjointed actions lead to great complications.  This reluctant kingship, this altar of gold, reminding one of the golden calf of the exodus, he offers that to the people instead.  Naturally, the people accept his will, his decision, for they know not otherwise.  Left with some sort of image fashioned in gold, it is at this very point that the people of Israel begin to fall back into pagan worship.

Gideon’s son, Abimelech (My Father Is King), will later attempt to wield kingship.  Problems arise.  Abimelech is not born of Gideon’s wife directly but from a concubine.  It seems the offers of Baal and Asherah and the garden of sexual license return and prosper in Gideon’s life.  Gideon also had seventy children.  As to Abimelech, he is killed in an unseemly manner.  An old woman drops a stone upon his head, probably from the battlements above.

Any leadership lending itself to the moment of charisma will always ascend to a higher place than one left to wobble its own course.  For those of us who follow Jesus’s teachings, all may become anointed.  Once accepting blessing, and an anointing undertaken, following the rightful and final conclusion seems the lesson provided by Gideon.

Was the Gideon series helpful, or informative?  Let us know.