The enlightenment teaching of the Essene was known as the WAY.  This teaching became the final interpretation of the Law and the Prophets, as revealed by Yeshua Messiah (Messiah = Anointed One).  The Way became the enlightened transitional teaching in the early church.

This article focuses on the anointing of Jesus (see also, The Way-Gideon).

When Jesus arrives, John the Baptizer’s ministry had already become famous throughout Israel.  John preaches the basic Essene message of repentance.  John’s emphasis between dark and light and the choice between the two is a continued theme in Jesus’s ministry as well (Lk. 12.3; Jn. 8.12, 12.35, 12.46).  John denounces Herod the Idumean, and Herod’s marriage to his own brother’s wife.  He denounces Sadducaic Temple authority as well as the rule of law imposed by the Pharisees.  He tells the multitudes there is a “sin stain” upon the nation (Mt. 3.7).

Repentance must arrive as a change in thinking.  “Most assuredly, I say to you, unless one is born again [second birth, awakened], he cannot see the kingdom of God,” as is spoken to Nicodemus in Jn. 3.3, reflects this change in thinking, and also reflects the conversion of consciousness Jesus later begins to teach.  Thought change will always remain the most basic element within conversion.  The true repentance pathway always unfolds from within.

John points to Jesus as Messiah

In carrying his message forward John’s broader ministry opens by establishing a ‘spiritual place’, planting a standard.  All matters of consequence, whether good or bad, will first have a standard planted— ‘Here is where I stand and what I stand for!’

John’s message moves past the strict standard of law and asserts revelatory and prophetic speaking.*   He condemns the Sadducees, who would certainly prefer to remain as the Temple Priests.  He condemns the legalistic Pharisees as well.  John preaches an understanding newly revealed to the people, that of the Nazarenes and the principles of the Way, and the message of the coming Messiah.

[*Baptism from teacher to acolyte was the usual practice upon entering a new sect. If we look at the roots of John’s early ministry, immersion represents the cleansing of the old mind and the establishment of a new mind. For a new religious order to become established this renewal must take place. John’s repentance message refers to a change in thinking, and not just bad habits to resist—the baptismal is intended to initiate the new man, with a different way of looking at the world.

Previous prophets also administered the religious calling of the repentance message. Good references are found in Jer. 18.8-11, Jeremiah’s speaking on God’s power in judging nations—evil for evil and good for good—with repentance the pivotal issue. Joel 2.13, tells us to repent of evil and receive the blessing of a merciful God, much like the John the Baptist message. Jonah 3, especially verse 10, wherein God sees the penitent works of Nineveh and repents of the retribution to be levied.]

John’s omnibus message for the land of Israel moves from ritual (sacrifice) to a change in thinking as preparation for Messiah.  For the people of Israel, direct preparation for Messiah is a huge change in thinking compared to waiting and wondering when Messiah will come.  John’s baptism initiates expectancy combined with preparedness for change—enter into the baptismal, participate in hastening Messiah!  This message seems much of the fire, the urgency, as John continues to preach.

Even as John stated in Matt. 3.3, he (John) is the voice crying out to “prepare the way of the Lord.”  This is an obscure way to say that the Messiah will bring forth the final message, the final conversion.  “While all the people were being immersed, Yeshua too was immersed.  As he was praying, heaven was opened; the Ruach HaKodesh (Holy Spirit) came down on him in physical form like a dove; and a voice came from heaven, ‘You are my Son, whom I love; I am well pleased with you,’ ” Lk. 3.22.*  No one could deny the godly light which manifested, and by those observing this experience, would have been a witnessing no one would forget. 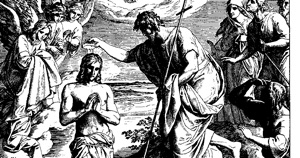 The power of the anointing would be overwhelming.  For those who grasped the meaning of this anointing, the shift in consciousness would have been not only ‘good news’, but news of an unbelievable kind.  People were expectant for the Messiah, but no one expected such a powerful and light-abounding presentation.

It is here that those who walk in The Way need take note.  Anointing in your calling is important, especially so for those who seek to serve, teach, or minister, for they will have more personal contact than other endeavors.  A person may be praying for guidance as to their calling, or perhaps a past calling has left them and a new calling is on the horizon.  The Spirit may convict by witnessing from within.  Many who came to see Jesus were converted by such means.  Pentecost anointed 5,ooo, but how many received the witnessing from within, whether having seen healing or by the word of Jesus’ preachments?  God blesses both within and without.

News concerning the anointing would spread into Jerusalem within days.  Some of the people at the anointing would be traveling through smaller villages on the way home, quickly welling up excitement.  Others would ask, was this anointing the provocative move of a resurgent religious order?  The Pharisees in particular would watch carefully.

Now the clash in consciousness occurs.  The people’s view differs from the hierarchical view, illustrated while Jesus is in Bethany, Mt. 21.46, “But when they sought to lay hands on him, they feared for the multitudes, because they took him for a prophet.” By the time Jesus reaches Bethany, conversion by the people is well underway.

For the religious hierarchy, was John’s more radical preachment signaling the return of a more active Essene priesthood?  Was the anointing of Jesus the triumphal ascendancy of a new high priest?  These would be disturbing questions for the Pharisees and the Sadducees, and as word of Jesus’s ministry spreads those concerns would continue to mount.  The Herodian faction, Pharisees* who supported Herod, crank up added heat.  Herod’s connection to the Sanhedrin remains tightly bound.  His power base remained with Sadducee Temple wealth and with Rome.

*Some scholars believe the Herodians to be Qumran Essene. In another view, the Herodians favored Greek custom and counseled with the Pharisees (Mk. 3.6).  More research might be required to pin this down.

Gracus, the Roman procurator preceding Pilot, appoints Caiaphus as the high priest.  As the story unfolds, the Sanhedrin dispatches Nicodemus, to monitor the Baptist ministry uproar, thence to discover Jesus.  As to Nicodemus himself, he will later become an adherent to Jesus the Nazarene, the Jewish Messiah.